The origins of Vintage Footballers are intertwined with the interest in football I have had throughout my life.

I was a Liverpool supporter from the early days of the Kevin Keegan era which started in 1971 having cheered for them in the Cup Final – days after losing to Arsenal in extra time they signed a young Keegan from Scunthorpe United, and by the autumn he was a superstar, soon replacing Alun Evans as my favourite player. I saw Keegan play once for Liverpool at Aston Villa in April 1976, and made my Anfield debut in Kenny Dalglish’s third game for Liverpool in August the following year. Keegan was my boyhood hero as Ronaldo or Harry Kane are probably the heroes of today’s kids, and the game of football and in particular Liverpool Football Club has been central to my existence for 40+ years & no complaints… from reading Shoot! and Goal! magazines rather than The Beano, to trading stickers at school & kicking a ball around every free moment, l became a collector and early member of the Association Of Football Statisticians from my early teens, and that developed my interest in football history. Long days spent in Birmingham and Liverpool Central Libraries with any books I could find. Football mad?? Definitely.
At school, any opportunity to watch football. With my eldest brother, I saw the great days of West Bromwich Albion, “The Three Degrees” of Cunningham, Regis and Batson up close and personal – I even saw The Three Degrees perform at The Hawthorns with those three heroes! From the age of 11, we’d load up into my brother’s car and land up at Ashton Gate, Maine Road, Anfield, Highfield Road, and normally The Hawthorns. A soft spot for The Albion persists of course, but Liverpool Football Club was my first love. I’ve been a season ticket holder at Liverpool Football Club since 1984 and I was lucky enough to be a shareholder for a few years.
Ever heard of a man called Angus Loughran?? Better known as “Statto”, Angus is a very old friend l met during my time at Manchester University (he’d gone to school with one of my best pals and fellow red, Ed Hart) just as he was making upward strides in the sports media world. In 1985-86 l did 148 live matches, Angus 145, we certainly did the best part of 100 together. Strangely we were born 4 days apart and our children 5 days apart! Odds on that?? I tried to do the 92 at university but got stranded on 87. Now of course that lot’s probably below 40 – every ground from White Hart Lane to The Old Show to The Baseball has basically been replaced. Others in droves are now non league from Meadow Lane to Saltergate to my own second team at University, Edgeley Park, where I used to commentate on Stockport County matches.
Football has given me the greatest and some of the worst moments of my life – I was at both Istanbul in 2005 and at The Heysel as a raw 19 year old student at his first European Final, probably respectively the best and worst days of my existence, and the experiences (life is a function of experience) that have created who I am today.
My subsequent career as a City investment manager took me back into the football world in 1997 when l (reluctantly) became the first/launch manager of the Singer & Friedlander Football Fund, working with Alan Hansen, he was great as I’d watched him play 300 times, no different to his on field personality. I can only say that during those few months I accumulated some of my best anecdotes, as I met some of the most diverse characters in the football industry in the course of managing that fund.
Life has taken its twists and turns in the 20+ years since then, but I retained my interest in football history and collecting throughout. My physical library (books, newspapers, match programmes and other footballana) takes nearly a room for itself, accumulated since the 1970’s. In 1986 I first discovered cigarette cards, and twice I spent an afternoon or more at Murray Cards in Hendon with Mr Martin Murray himself (I last saw him in 2014 and bless him, well into his late 80’s, he was still going strong!), buying whatever Liverpool related cigarette cards I could buy. I’d go to all sorts of fairs, programme fairs, antiques fairs, accumulating whatever gems I could. I loved cigarette cards from the start. The images… Then eBay arrived.
Over years I developed a modest expertise in cigarette and trade cards, and a great love for them. I started using eBay to trade cards as a hobby business a while before Vintage Footballers was conceived, mainly as a way to accumulate a better collection and trade out the items I didn’t want, and the eureka moment came when I started to notice that I was selling a great number of the cards to relatives of the bygone players whose cards I was selling. In May 2014, I had two cousins, unbeknownst to each other, buy the same 1900 Ogden’s card of their great great grandfather, Preston and Scotland goalkeeper Peter McBride. The penny dropped. I had a good collection. Why not make a website to allow people to buy the images?? All I can say is that it had never been done for a reason – it’s been a massive piece of work, my life’s work, but there’s no money in it! But then again, I don’t do it just for the money, it’s great fun and a great pleasure to deal with people who share similar interests to my own.
And now, five years later, I’ve launched the sister website, Vintage Cricketers –  please feel free to contact me at james@vintagefootballers.com if any of this is of interest! Or send me a message through the Vintage Footballers Facebook page.
Anyhow, hope that was interesting, probably best make a cup of tea now… And thanks for visiting Vintage Footballers!
Best wishes
James 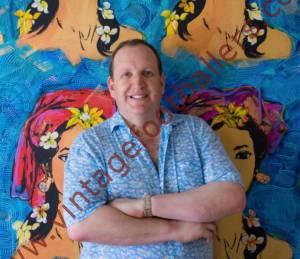